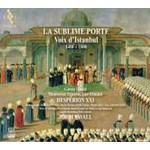 "The ensemble offers authentic recreations of Turkish, Greek, Armenian and Sephardic pieces, told in textures and timbres of oud, duduk, ney and Savall's own rebab. This is music of great subtlety, technical accomplishment and powerful emotional impact."
(The Independent)

The Sublime Porte was the name of the open court of the sultan, led by the Grand Vizier. It got its name from the gate to the headquarters of the Grand Vizier in the Topkapi Palace, Istanbul, where the sultan held greeting ceremonies for foreign ambassadors. It was an ancient Ottoman practice to make the gates of cities and kings' palaces places of assembly. Later the name came to refer to the Empire's position as gateway between Europe and Asia.

Following the success of the album 'Istanbul', Jordi Savall crosses new boundaries between Orient and Occident: this time, the vocal traditions of the Ottoman Empire, Armenia and the Jewish Diaspora are masterly resuscitated. Instrumental interludes enable us to enjoy this journey through time and space. In addition to Hespèrion XXI, this album features the elite of Turkish traditional musicians under the inspired direction of Jordi Savall.