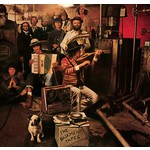 After Dylan was injured in a motorcycle accident he concealed himself from the public's gaze for a long while to work with The Band at houses in and around Woodstock where Bob Dylan and members of The Band lived. In that period of time they recorded more than 100 tracks together. And even though the songs were recorded in 1967, this official bootleg wasn't released until 1975.

Although some of the songs on The Basement Tapes are humorous, most of the songs dwell on nothingness, betrayal and a quest for salvation and they possess a rootsy quality that anticipates the Americana genre.

Side D
1. You Ain't Goin' Nowhere
2. Don't Ya Tell Henry
3. Nothing Was Delivered
4. Open The Door, Homer
5. Long Distance Oprater
6. This Wheel's On Fire