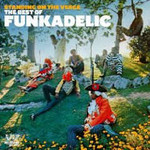 Funkadelic
Standing On The Verge - The Best Of Funkadelic

Though they often took a back seat to their sister group Parliament, Funkadelic furthered the notions of black rock begun by Jimi Hendrix and Sly Stone, blending elements of '60s psychedelia and blues plus the deep groove of soul and funk.

The band pursued album statements of social/political commentary while Parliament stayed in the funk singles format, but Funkadelic nevertheless paralleled the more commercial group's success, especially in the late '70s when the interplay between bands moved the Funkadelic sound closer to a unified P-Funk style.

Led by George Clinton, and featuring a revolving cast of top-notch musicians incl. Bernie Worrell, Eddie Hazel, Bootysy Collins and Garry Shider to name but a few, this groundbreaking group were deservedly inducted into the Rock n Roll Hall Of Fame by none other than Prince himself.