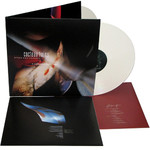 Limited Edition Double LP. Stars and Topsoil collects some of the Cocteau Twins' better-known 4AD material, which ends at 1990, before their departure to Fontana in the U.K. and Capitol in the U.S. Outside of college radio support and some late-night MTV rotation, the Cocteaus were basically invisible and unheard of in the U.S.; in the U.K., they were a higher profile act, but they still remained more of a cult band with a rabid following.

As a barometer for the unfamiliar more than anything else, the compilation will either lead to the purchase of the group's entire catalog or nothing more, because those who are familiar tend to fall into two distinct camps: There are those who find the group to be from the gods, and there are those who are in firm belief that they were birthed from the stinking pit of the precious art-fluff well.

Though the Cocteaus never really repeated themselves, they held a set of characteristics throughout their discography that made them extremely unique -- characteristics that launched a legion of imitators. While the selection here is fairly representative, there still isn't a definitive first place to go with the Cocteaus. An era spanning seven LPs of studio material and nine singles is a good load to pick from, and this particular track listing is just one of hundreds a fan could come up with. The disc is just as quality as most other Cocteaus releases, though it obviously misses the feel of a proper studio album. Since 4AD began reissuing those studio works in 2003, devout fans will have little use for this overview. 4.5 / 5 All Music Guide.