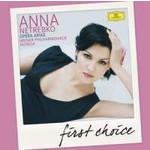 Anna Netrebko is joined by none other than the Wiener Philharmoniker and BBC Philharmonic's new principal conductor Gianandrea Noseda.

"With singers like her there's no more need to worry about successors to great figures of the past … Her voice has a remarkable combination of lightness and sufficient weight, is technically fully developed, secure in every register and blessed with an affecting timbre. What's more, the singer acts her role superbly. And that she looks like a young Hollywood diva surely won't hurt her either."
Kurier (La Traviata Vienna), 4 April 2003

"She's convincing at every moment: with superb vocal endowment and flexibility, in dramatic attack and her precise, intelligent interpretation of the arias. A Violetta without affectation or artifice, endearing, enchanting, moving."
Kronen Zeitung (La Traviata Vienna), 4 April 2003

"One of the new generation of young artists signed up by DG this autumn, the soprano Anna Netrebko has emerged from Valery Gergiev's de facto 'finishing school', the Kirov Opera company in St Petersburg. After study with no less a coach than Renata Scotto, Netrebko has added a number of roles from the French and Italian repertoires to her armoury. This solo recital, conducted by an old colleague from the Kirov, Gianandea Noseda, makes a fine portrait of a lovely singer." (Gramophone)