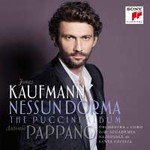 Described by The Daily Telegraph as "The world's greatest tenor", Jonas Kaufmann dedicates his new album to the most popular Italian opera composer of all time, Giacomo Puccini. Featuring the most loved aria of all time, 'Nessun Dorma', alongside stunning pieces from Manon Lescaut, La Boheme, Tosca and more. Together with Jonas Kaufmann, this album includes celebrated Royal Opera House conductor Antonio Pappano and his renowned orchestra and choir of the Accademia Nazionale Di Santa Cecilia.

"All the operas (except the all-female Suor Angelica) are represented, ending with a pinging, thrilling Nessun Dorma. It's as far from Pavarotti as you can get, yet still captures the essence of Puccini." The Observer, 6th September 2015 ****

"On stage he is remarkably invested in character and text, in other words in being somebody else rather than himself. The best of Nessun Dorma - and Kaufmann's best is peerless - shows how well he can do that even on record, assisted by the vivid playing of the Santa Cecilia Orchestra in Rome under Antonio Pappano." The Times, 11th September 2015 ****

"Although he does not sound very Italian, Kaufmann draws strength from staying true to himself, a gloriously bronze-voiced German tenor, welding musicianship with smouldering emotion...Pappano and his Santa Cecilia orchestra fire up every track with native Italian passion." Financial Times, 18th September 2015 ****

"The sound is superb, and Antonio Pappano, orchestra, chorus, and assisting singers are excellent. If Pappano gives more room to arias like "Non piangere, Liu", it helps to make the little aria more effective out of context. This is an almost perfect recital; when it flops, it's due to a mismatch between singer and repertoire. But if you want to sing all of Puccini's arias on one CD (except for "Che gelida" and "E lucevan", which he recorded for Decca), you do what you can. And what he can is pretty magnificent." (10/10 ClassicsToday)