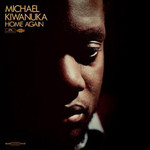 Immersing the listener in a sound that is both modern and as familiar as the classics, Kiwanuka manages to strike the balance between being contemporary and somehow utterly timeless.

Few records make such an instant impression as 'Home Again', the debut album by Michael Kiwanuka. Immersing the listener in a sound that is both modern and at the same time as familiar as the classics, it manages to strike the balance between being contemporary and somehow utterly timeless.

From the opening bars of the stirring "Tell Me A Tale", it is instantly clear that 'Home Again' is a very special album. While its more upbeat characteristics are embodied in the Prince Buster-like loping of the lovelorn but irresistibly catchy Bones and the rolling soul groove of "I'll Get Along", elsewhere it proves itself to be a record of real stripped-down beauty. In "I Won't Lie", with its gospel-infused echoes of The Staples Singers, Kiwanuka offers something akin to a modern spiritual, while in "Rest" he turns in a tender "love lullaby" and in "Always Waiting", he blends classical elements with the confessional intimacy of Roberta Flack. It is with the title track "Home Again", however, that Michael Kiwanuka feels the record's sounds and themes are ultimately encapsulated.

Other parts of the record, on the other hand, find Kiwanuka struggling for peace of mind and using his songs as a form of self-empowerment, not least in the soulful "I'm Getting Ready", the darker, unburdening "Any Day Will Do Fine" and the self-explanatory "Worry Walks Beside Me".