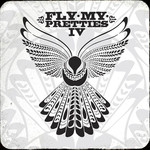 Led by Barnaby Weir (The Black Seeds), Fly My Pretties is a rotating collective of musicians with an ethos of mixing well-known performers with emerging talent.

The 16 new songs on their 4th CD and DVD represent the best takes from November 2011's tour. These new songs were performed, filmed and recorded live across nine sold out shows to over 10,000 people. The tour also marked the collective's first international foray, playing one impressive sold out Melbourne date.

The show saw the 16-strong cast unite with an exciting new concept, re-inspired style and re-invigorated sound to challenge audience's senses and redefine what Fly My Pretties was to their fans.

Via a unique collaboration, renowned visual/street artist Flox found inspiration in each song to create 16 original and dedicated pieces of art. A unifying thread throughout the show, the artworks were brought to life through projection, animation and visual trickery. Following the tour, these visuals were expertly mixed with the live video footage to create a seamless visual representation of the performances on DVD.

Fittingly, Fly My Pretties IV also marked a dramatic shift in the collective's costumes and style, which was curated by homegrown fashion labels Cybèle and MisteR. Bringing the collective into the present with an exciting and contemporary new look, Cybele designed dramatic and edgy costumes for the female cast members, while MisteR took care of the male cast members with their signature quirky approach and detailed tailoring.

Marking a first for the collective, Fly My Pretties IV reflects a true full spectrum collaboration of New Zealand creative culture bringing together music, film, art animation and fashion. Evolving while still remaining true to their legacy, the release heralds a new era for the collective both musically and artistically.

PERFORMERS:
The Fly My Pretties IV cast was the most diverse yet and featured an impressive selection of kiwi talent including:

Disc 1 - CD:
Doorstep Blues
Dr Plum
You Know Now
Apple Heart
Three Feathers
Fallen From You
I Am Gone
Please
Journey's End
Underneath The Stars
Space Cadet
Folding Over
Hit The Hay
Am I Gonna Make It
Ode To The World
Turnaround

Disc 2 - DVD:
Doorstep Blues
Dr Plum
You Know Now
Apple Heart
Three Feathers
Fallen From You
I Am Gone
Please
Journey's End
Underneath The Stars
Space Cadet
Folding Over
Hit The Hay
Am I Gonna Make It
Ode To The World
Turnaround

Low and Behold, High and Beyond