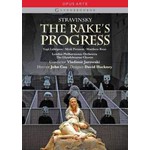 "The combination of Vladimir Jurowski and the London Philharmonic Orchestra ensures crisp ensemble of the highest quality."
(Gramophone)

"Full of colour and light, and brimming with wit, this is a production that lifts the performers...Lehtipuu conveys [Tom's] fresh-faced innocence, making his gradual demise all the more heart-breaking. Bass Matthew Rose is not the most chilling Nick Shadow, but is all the more believable as an apparently supportive, and likeable, friend to Tom, until the veil drops...[Persson] underpins [Anne's] heartfelt love with a steely determination...An absolute triumph."
(BBC Music Five Stars DVD Choice - January 2012)

"It is hard to imagine a Tom Rakewell who looks the part better than the lanky, almost adolescent Topi Lehtipuu, his wide-eyed innocence an open invitation to corruption, and he sings the role with elegance. Miah Persson is almost his equal...The combination of Vladimir Jurowski and the London Philharmonic Orchestra ensures crisp ensemble of the highest quality."
(Gramophone)

"Star of the show - as she is so often - is Miah Persson, who turns out to be a radiant and steadfast Anne...[Lehtipuu] manages to give us a Tom whoe fundamentally endearing qualities shine through, even when he's at his most cocky...Matthew Rose's portrayal of Nick Shadow has been criticized in some quarters for its lack of venom, but I find that the mellifluous coating to his malevolence only adds to the effect."
(International Record Review)

"A brilliant performance of an opera like no other, in a classic Glyndebourne production."
(Recording of the Month MusicWeb April 2012)

In 2010, this revival under Glyndebourne's Music Director, Vladimir Jurowski, captured the opera's neo-classical spirit and its juxtaposition of whimsy, cynicism and compassion, prompting the Financial Times to call it, ''as enjoyable a performance of Stravinsky's opera as any that has come along".