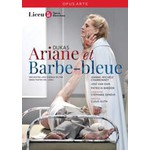 Stéphane Denève is universally acclaimed for his interpretation of French repertoire.

This is the twelfth release from the Liceu-Opus Arte partnership.

Dukas's opera Ariane et Barbe-bleue, based on Maeterlinck's symbolist version of the classic tale, sees free spirit Ariane become the sixth wife of the infamous Barbe-bleue, who gives his new bride seven keys to seven doors, but prohibits the use of the last. Ariane discovers an array of glittering jewels behind the first six doors, but a terrifying reality awaits her as she unlocks the seventh.

José van Dam is cast as the villainous Barbe-bleue, while taking on the immensely demanding role of Ariane - who does not leave the stage throughout the entire opera - is American soprano Jeanne-Michèle Charbonnet.

Dukas' Ariane et Barbe-bleu is cut from the same cloth as Debussy's Pelléas et Mélisande, but much less well known; unfairly so, in my view. Both are based on work by Maeterlinck and both are fairly plotless inner-dramas where the poetry of symbolism is more important than any action. In the same way that Pelléas and Mélisande inhabit the timeless, locationless region of Allemonde, Ariane takes place entirely indoors in a carefully unspecific time and place, with only the briefest intrusion of the outside world towards the opera's conclusion. The affinities go even deeper when you compare their musical style side by side. Dukas' style of orchestration is very similar to that of Debussy. His is a half-lit world of twilight and near darkness, literally so in the second act when Ariane enters - or, in this production, descends - into the final chamber to meet and then set free Bluebeard's previous wives. The orchestration is suggestive of weight and claustrophobia, with strong use of the darker colours of, say, the horn and cor anglais. That is not to say that Dukas is overwhelmed by the prior example of Debussy; quite the opposite. He proves himself every inch the master of his subject and is not in the least intimidated by the stature of his predecessor. Listen, for example, to the extraordinary prelude to second act, depicting the darkness of the seventh chamber in which are imprisoned Bluebeard's wives, a subtle but unflinching crescendo that makes its way fleetingly towards the uncertain light. Like Debussy, this is not a world of melody but of suggestion and atmosphere and it is very powerful, Dukas adopting (and adapting) the sound-world of Wagner to his own special ends. It's an extraordinary and multi-layered work of music drama, and I suspect that the main reason why this opera isn't better known is simply because Debussy got there first.

The story, what there is of it, bears some similarities to Bartók's in its first act, with seven doors, behind the last of which lie Bluebeard's previous wives. However, while Bartók's Judith is an abrasive character who finally accedes to her place in Bluebeard's gallery, Ariane is liberated and a liberator. She perpetually takes control of her situation and she sets free Bluebeard's five wives, encouraging them to freedom. Intriguingly, however, they are not prepared to follow her. In the final scene Bluebeard is wounded by the hostile villagers but, rather than kill him, the wives (including Ariane) tend his wounds and try to nurse him back to health, to music of remarkable tenderness. In the end only Ariane has the courage to leave and she does so alone. There is ripe territory here for a director who wants to explore the deepest implications of the Stockholm syndrome, with the suggestion of the wives returning voluntarily to their imprisonment. Guth's production is very static, but it's hard to complain about that in an opera like this one. The white which dominates all the sets and costumes is reminiscent of sterile institutions like hospitals, prisons and asylums, and Guth's depiction of the five wives is surprisingly naturalistic in its vision of the deranging effects of solitary confinement.

For all his importance to the plot, Bluebeard has a tiny role in the action. He appears on stage in the third act, but his singing is limited to a very few phrases at the end of the first act, so it is luxury casting indeed to have José van Dam as Bluebeard. The five wives all sing very well, but the central figure is undoubtedly Ariane, who bears the lion's share of every scene. Full credit to Jeanne-Michèle Charbonnet for taking on what must be a very punishing role and she gives it a good stab. The truth is, though, that she doesn't bring the sense of luxury or even confidence that the role really needs. I had a continued sense that she was struggling to get on top of the tessitura - a bit like her recent Elektra for Gergiev on LSO Live - and in the big showpieces, such as her diamond aria, she seems to attack from below the note as if struggling to take command of the role. The same is true in her Act 2 arioso describing the delights of the natural world outside the prison window and in the showpiece scene where she opens it. She looks appropriately imperious and buys into the character completely, but I would want to hear the opera sung again by a voice that has this part more fully in its stride. No complaints about the orchestral playing, though, nor, especially, about the direction of Stéphane Denève. He is a renowned Debussian, as his farewell CD with the RSNO proved and he sounds fully at home in Dukas' sound world, moulding it carefully as the music gently unfolds.

Despite reservations, this DVD is definitely worth a look, but due to the nature of its "action" this opera would lose little if it were given in a concert performance or on an audio-only CD. It would be good, for example, if Warner were to re-release their CD of the opera with Katherine Ciesinski and Gabriel Bacquier conducted by Armin Jordan. This DVD will do until then, though.