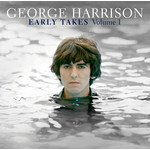 'Early Takes Volume 1' is a pivotal companion piece to Martin Scorsese's stunning, critically acclaimed documentary on the life of George Harrison, 'Living in the Material World'.

The album features a wealth of previously unreleased recordings from Harrison, including early takes of "I'd Have You Anytime" and "Awaiting On You All," plus unheard demo versions of "Behind That Locked Door," "All Things Must Pass," "Run of the Mill" and "My Sweet Lord," all later featured on Harrison's 1970 chart-topping album All Things Must Pass. Other unreleased tracks include demos of "The Light That Has Lighted the World," "Let It Be Me," Bob Dylan's "Mama You've Been on My Mind," and an early take of "Woman Don't You Cry For Me."

"In 2009 I was privileged to be invited by Olivia to listen to tapes that George had stored in his library at Friar Park. In the beautiful setting of George's studio, overlooking the meticulous gardens that he had created, engineer Paul Hicks and I unboxed forgotten reels to hear the music George had left behind. This first collection provides a glimpse of what we found. From early multi-tracks of live takes of My Sweet Lord and All Things Must Pass to more recent tracks like Mama You've Been On My Mind, we hear an intimacy to George's voice and guitar that can only be achieved with live performance devoid of production. I'd like to thank Olivia and Dhani for the honour of being invited into their home to share the work that George gave us all."
- Producer, Giles Martin