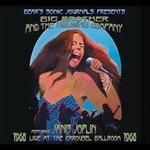 Big Brother & The Holding Company might best be known for being the first band Janis Joplin sung in, a live recording like this one shows their prowess as a five‐piece band.

Their June 23, 1968 show at the Carousel Ballroom would prove to be legendary on a number of levels. The venue was owned by members of Jefferson Airplane and The Grateful Dead and would later become the Fillmore West. Janis would leave the band only two months after the show to pursue her solo career, making this one of the last times the ensemble worked together. The show was recorded by Augustus Owsley Stanley III , a.k.a. 'Bear', soundman of The Grateful Dead and a masterful LSD‐cooker, who also supervised the re‐mastering of the recordings shortly before his death in March 2011.

This is to be the first in a series of releases from his archive titled 'Bear's Sonic Archive', and it promises to be one hell of a ride. Though some of these songs have appeared on a 1972 Janis Joplin collection before in a very raw form, this is the first time these recordings are being released on vinyl.