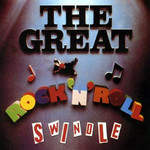 The soundtrack to the film of the same name by the highly influential and controversial English punk rock band, the Sex Pistols.

'The Great Rock 'n' Roll Swindle' is the soundtrack to the film of the same name by the highly influential and controversial English punk rock band, the Sex Pistols.

The band was defunct by the time the soundtrack was being prepared, and Johnny Rotten refused to participate in the project, so the "proper" Sex Pistols tracks were done by taking Lydon's vocals from the October 1976 demo session recordings and re-recording their instrumental tracks (done by Paul Cook and Steve Jones).

'The Great Rock 'n' Roll Swindle' album features a significant number of tracks that omit Lydon entirely; most of them written and recorded after the band broke up. These include Sid Vicious singing cover songs, two new original songs ("Silly Thing", sung by Cook and "Lonely Boy", sung by Jones), tracks Cook and Jones recorded with Ronnie Biggs, the title track and "Who Killed Bambi?" sung by Edward Tudor-Pole, and numerous novelty tracks including French street musicians playing "Anarchy in the UK", a medley of several Sex Pistols songs covered by a disco band (The Black Arabs) and of course Sid Vicious' awful but strangely appropriate reading of Frank Sinatra's "My Way."