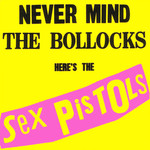 In 1977 the Sex Pistols changed the face of music and popular culture overnight with one of the most influential and controversial records in British music history.

Famous for inspiring a generation to rise against the musical establishment in the late 1970s, the Sex Pistols changed the face of music and popular culture overnight with one of the most influential and controversial records in British music history. 35 years after its 1977 release, 'Never Mind the Bollocks' and the Sex Pistols' legacy continues to grow as new generations discover its powerful message and still relevant, seminal songs.

"Britain in 1976 was a country divided by class, and deeply wounded by industrial unrest, along with mass unemployment. The recording industry was almost comatose and the effect was a proliferation of over-blown super-groups, producing self-indulgent "progressive rock".

Consequently, the stage was set for the arrival of four working-class, individualistic and dispossessed teenagers. Their mission? Simple, create chaos and mayhem among the order of the established music business. They were the most infamous band of all time, from the littered back streets of '70s London to incredible worldwide notoriety… and their ultimate self-destruction. They were the Sex Pistols and they produced one of the most influential albums in rock music - 'Never Mind the Bollocks, Here's the Sex Pistols'.

Discovered, cultivated, and exposed (abused?) by "mis-manager" Malcolm McLaren - via much controversial press - The Pistols were originally in existence for only 26 months, although they did re-form many years later for their enormously successful "Filthy Lucre" tour. The initial line-up consisted of guitarist Steve Jones, Glen Matlock on bass, drummer Paul Cook, and the satirical vocalist / frontman John Lydon (otherwise known as Johnny Rotten). However, after the recording sessions for NMTBHTSP were completed, Matlock was sacked for being too melodic, to be replaced by the legendary Sid Vicious. Sid couldn't really play the bass very well at all, but at the time it obviously didn't matter. And, along with the likes of Elvis Presley, Keith Richards, and Joey Ramone, Vicious remains one of the most enduring icons of popular music - God bless his little safety-pinned cotton socks.

Eschewing the bombast of other typically "arty" groups of the time, the Pistols' own particular take on rock 'n' roll went straight for the jugular - like the proverbial baying Rottweiler. This approach can be experienced instantly, when the first few seconds of the scorching opener "Holidays in the Sun" kicks in. The following number "Bodies" hammers this home as well with its particularly visceral lyrics, and general nastiness… ha!

Other standout moments on this tour-de-force include "God Save the Queen", which brilliantly coincided with Queen Elizabeth's jubilee at the time, and the band's no nonsense single, "Anarchy in the U.K." Both cuts feature much ferocious guitar playing from Jones, plus Mr. Rotten's most venomous vocals.

"Pretty Vacant" is yet another high point of this 12-track recording. The intro is classic Sex Pistols and the infectious chorus rocks! Lastly, special mention must also be made of "EMI", which is an aural snub to the two companies that dumped the Sex Pistols (A&M and EMI). It is full of the band's typical cynicism & contempt for the "men in suits", and is the perfect ending to this raw and energetic debut.

'Never Mind the Bollocks, Here's the Sex Pistols' became a milestone in the history of the burgeoning punk scene of the time. Even today, the group and this album remain a template for aspiring musicians across the board."
-MARTY & GEOFF (9 October, 2004)

Assume Nothing, Question Everything / the Very Best of