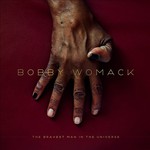 Bobby Womack
The Bravest Man in the Universe

'The Bravest Man in the Universe' marks Bobby Womack's first album of original material since 1994's 'Resurrection' - quite a gap. Beautifully co-produced by Damon Albarn (Gorillaz, Blur) and Richard Russell, the 11 contemporary cuts presented here were laid down at Damon's Studio 13 in West London and New York's Manhattan Centre between October-December of 2011. Lana Del Ray, the inimitable Gil Scott-Heron and Fatoumata Diawara appear on three separate tracks, with their vocal contributions complementing Bobby's perfectly and adding zest to the mix.

Bobby's musical career has spanned 50+ years during which time he has written songs recorded by The Rolling Stones, Wilson Pickett, Janis Joplin (to name a few) and has played on sessions for Wilson, Aretha Franklin, Ray Charles, Dusty Springfield and more. Nicknamed The Preacher and The Poet, Bobby's body of work has topped the singles charts many times over and his collaborations with artists from Patti Labelle to Mos Def to Damon's Gorillaz showcase a legend who has and continues to influence musicians across genres. Bobby was, very deservedly, inducted into the Rock and Roll Hall of Fame in 2009.

1. Bravest Man in the Universe
2. Please Forgive My Heart
3. Deep River
4. Dayglo Reflection
5. Whatever Happened to the Times
6. Stupid Introlude
7. Stupid
8. If There Wasn't Something There
9. Love is Gonna Lift You Up
10. Nothin' Can Save Ya
11. Jubilee (Don't Let Nobody Turn You Around)

If You Want Loyalty Buy a Dog