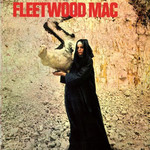 Pious Bird of Good Omen was originally released in 1969 as a compilation of the band's bluesy roots, featuring scorching cover versions of Little Willie John's "Need Your Love So Bad" and Robert Johnson's "I Believe My Time Ain't Long". The B-side features the international hit single "Albatross" and Peter Green's composition "Black Magic Woman", the latter being popularized by Santana's version in 1970. This album is a must-have for Blues fans.

SIDE B
1. ALBATROSS
2. BLACK MAGIC WOMAN
3. JUST THE BLUES
4. JIGSAW PUZZLE BLUES
5. LOOKING FOR SOMEBODY
6. STOP MESSIN' ROUND