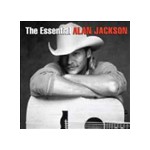 A career-spanning, double-disc collection featuring all 34 of Jackson's #1 hits. With 37 songs in all, the project will also include two rare tracks and the single, "As She's Walking Away," with Zac Brown Band featuring Alan Jackson. Alongside Alan's first chart-topper, 1990's "Here in the Real World," fans will find such enduring favourites as "Gone Country" (1995); Jackson's poignant, GRAMMY-winning "Where Were You (When the World Stopped Turning)" (2001); the Jimmy Buffett duet "It's Five O'Clock Somewhere" (2003); last year's "Country Boy," and many more.

Also included are the beautiful "Look at Me" (previously available on the 2008 soundtrack to Billy: The Early Years) and Jackson's never-before-released take on the classic Johnny Cash hit, "Ring of Fire." A 16-time CMA and ACM Award winner and a GRAMMY-honoured songwriter, Jackson's career to date has included sales of more than 50 million albums.

Disc 1
Ring of Fire
Here in the Real World
Wanted
Chasin' That Neon Rainbow
I'd Love You All Over Again
Don't Rock The Jukebox
Someday
Dallas
Midnight in Montgomery
Love's Got A Hold On you
She's got The Rhythm (And I Got The Blues)
Tonight I Climbed The Wall
Chattahoochee
Who Says You Cant Have It All
Summertime Blues
Livin' On Love
Gone Country
I Don't Even Know Your Name
Tall, Tall Trees