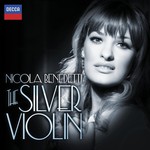 Acclaimed as one of the leading violinists of her generation, best-selling Scottish virtuoso Nicola Benedetti turns the spotlight on Hollywood in this collection of original violin music written for the silver screen.

Taking as its centrepiece Korngold's melodious Violin Concerto, The Silver Violin celebrates the film music of composers from both the East and West. This unique selection of tracks includes the poignant lament from John Williams's Oscar-winning score for Schindler's List, the beautiful My Edward and I from Dario Marianelli's 2011 music for Jane Eyre, and extracts from Howard Shore's Golden Globe-nominated score for Eastern Promises, which Nicola herself performed on the original soundtrack.

"Benedetti decorates this repertoire with gleaming high-register pirouettes, plus vibrato throbs and hesitations that never descend into schmaltz...Such good taste is a pleasure, though her discretion can make the music paler than necessary." (The Times)

"Benedetti's decision to place [the Concerto] in this particular context actually serves to enhance its musical stature. Certainly her performance is beautifully honed with a particularly atmospheric account of the central Andante...she has an instinctive grasp of the ebb and flow of Korngold's melodic lines and avoids the obvious temptation of becoming overtly mannered in order to intensify the musical expression." (BBC Music)

Live at the Royal Albert Hall