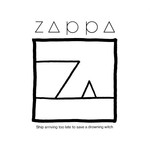 Frank Zappa
Ship Arriving too Late to Save a Drowning Witch

Who'd have thunk it: FZ was listening to his daughter Moon imitate some of the "valley girls" she'd encountered in high school, and asked her to put that unique monologue on tape. Matching Moon's efforts with a catchy little tune composed for the occasion, FZ scored an honest-to-God hit single (#32 on the singles chart, his highest-ever charting single in America), and a national trend of sorts. "Valley Girl" also garnered FZ his second Grammy nomination, for Best Rock Performance By A Duo Or Group With Vocal.

This was one of the very few single-vinyl albums that FZ released during the later part of his career, but the six tracks cover a variety of ground, from the instrumental workouts on the title track to the operatic "Teenage Prostitute," one of the overlooked comedic gems of the Zappa catalogue.