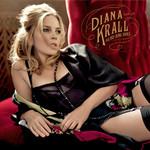 Diana Krall's extraordinary new album, Glad Rag Doll, is an exhilarating and adventurous exploration of new sounds, new instrumentation and new musicians. It stars a singer and piano player, filled with mischief, humour and a renewed sense of tenderness and intimacy.

The record reveals itself at that remarkable vanishing point in time where all music; swinging, rocking and taboo, collide with songs of longing, solace and regret. All are made new again in a vaudeville of Krall's own imagining. It is at once a major departure and a natural progression for the gifted musician. Diana simply calls the album, "a song and dance record".

Side A:
We Just Couldn't Say Goodbye
There Ain't No Sweet Man That's Worth The Salt Of My Tears
Just Like A Butterfly That's Caught In The Rain
You Know - I Know Ev'rything's Made For Love

Side B:
Glad Rag Doll
I'm A Little Mixed Up
Prairie Lullaby

Side C:
Here Lies Love
I Used To Love You But It's All Over Now
Let It Rain

Side D:
Lonely Avenue
Wide River To Cross
When The Curtain Comes Down