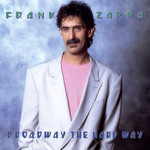 ow digitally remastered, these recordings are mostly from the epic 1988 tour, with a guest appearance by Sting plus bonus material!

Mostly premiere recordings peppered with political commentary. This was the first of a few collections from the epic 1988 tour, and the CD is nearly twice as long as the original album version.

Track highlights: "Promiscuous," 'Elvis Has Just Left The Building" and "Jesus Thinks You're A Jerk" - plus a "Republican medley" including "Dickie's Such an Asshole" and "When the Lie's So Big," plus a few jabs at one Democrat (Jesse Jackson on "Rhymin' Man") for good measure.

Guest appearance by Sting on a live version of the Police B-side "Murder By Numbers" (In response to PMRC allegations that this song was written by Satan, Sting is heard to note that "I wrote the fuckin' song!") This earned FZ's 7th and final Grammy nomination (for Best Musical Cast Album).

Elvis Has Just Left The Building
Planet Of The Baritone Women
Any Kind Of Pain
Dickie's Such An Asshole
When The Lie's So Big
Rhymin' Man
Promiscuous
The Untouchables
Why Don't You Like Me?
Bacon Fat
Stolen Moments
Murder By Numbers
Jezebel Boy
Outside Now
Hot Plate Heaven At The Green Hotel
What Kind Of Girl?
Jesus Thinks You're A Jerk