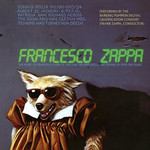 Originally released in 1984, 'Francesco Zappa' this CD features works by a little-known Italian 18th century composer, as performed by Frank on synclavier.

Francesco Zappa was a little-known Italian 18th century composer whose work is now being rediscovered after many years of neglect; how Francesco managed to get his hands on 20th century electronic equipment is anyone's guess. Or so the legend goes; actually this is FZ spinning Francesco's classical pieces on his Synclavier.

Originally released in 1984, 'Francesco Zappa' is a companion piece to the more contemporary-styled 'Jazz From Hell' - this is one of the early products of Zappa's productive electronic-music period.