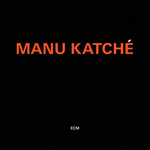 Manu Katché's fourth album for ECM sees his unique drumming setting the scene and direction, with compositions and arrangements radiating outward from its rhythm-patterns.

Manu Katché's eponymously-titled fourth album for ECM sees his unique drumming setting the scene and direction, with compositions and arrangements radiating outward from its rhythm-patterns. His strongly propulsive yet relaxed groove is unlike any other drummer's.

Katché's distinctive drum style is derived from classical snare drum and kettle drum studies, as well as from a conscious embracing of African roots. He worked with Peter Gabriel on the album So, and gained worldwide recognition on the Amnesty International World tour with Gabriel, Sting and Tracey Chapman. He subsequently recorded and/or toured with Joni Mitchell, Robbie Robertson, Dire Straits, Simple Minds, Joan Armatrading and dozens more.

Personnel in this Katché band are Norwegians Nils Pettter Molvær and Tore Brunborg, first heard together on ECM in the band Masqualero in the 1980s: they still play fabulously together. British keyboardist Jim Watson plays at turns minimalistic lyrical piano and thick, swirling organ.