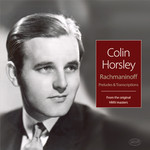 Perhaps the finest NZ pianist of his generation, these London recordings from the mid 1950s sparkle with musicianship.

Horsley was born in Whanganui in 1920. From 1936 he studied at the Royal College of Music in London. There he studied with Herbert Fryer, Angus Morrison, Tobias Matthay and Irene Scharrer. His solo debut was in Rachmaninoff's Piano Concerto No. 3.

"a distinguished and sensitive concert pianist with a fine technique who was much in demand in London concert halls from the middle of the Second World War until the late 1960s." (The Telegraph)