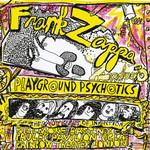 You wanted more old Mothers, you got 'em: This "archival" double CD, originally released in 1992, features performances and assorted dialogue snippets from the early 70s version of The Mothers, recorded onstage at NYC's Fillmore East, UCLA's Pauley Pavilion and The Rainbow Theatre in London, and offstage in various locales.

This was the Flo & Eddie version of the band, with the ex-Turtles lending their quintessential California harmonies to some of the Mothers' funniest moments as well as their most straight-ahead rockers.

Of special interest is the John Lennon & Yoko Ono guest appearance at The Fillmore in 1971. It had been Lennon's first onstage appearance in nearly two years and his last for a long while, performing the blues standard "Well (Baby Please Don't Go)" and a long jam during which Yoko was tied up in a sack. This performance was heard in excerpted form on Lennon/Ono's album SOMETIME IN NEW YORK CITY; now it can finally be heard in context.