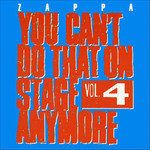 Frank Zappa
You Can't Do That on Stage Anymore Vol. 4

Because of the huge time span, there's an enormous list of musicians, including FZ on lead guitar & vocals, Captain Beefheart (handling vocals and harmonica on "The Torture Never Stops"), the mid-70's band, the '79 band, the `82 band, the `84 band, the `88 band, and even 2 Mothers tracks from 1969 ("You Call That Music?" and "Tiny Sick Tears") - Lowell George appears on both. Archie Shepp guests on tenor sax solo on "Let's Move To Cleveland" from 1984 (Amherst MA). There's also a smelly-beard routine involving George Duke; a "Montana" that segues two versions from 12 years apart; and a version of "Stevie's Spanking" with Steve Vai playing one of his best solos, doubtlessly inspired by the events described in the lyric.