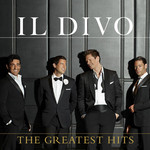 Il Divo have sold over 26 million albums worldwide, chalking up 160 gold and platinum sales in over 33 countries including New Zealand.