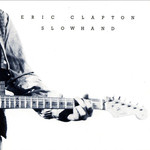 Eric Clapton has been in the spotlight for close on fifty years and the portrait of his artistry is a complex one - from his early days as a guitar icon to a songwriter of great sensitivity, as well as an interpreter of everything from blues and jazz to rock and country music. He has fashioned albums in many different styles and with many different themes, yet few have the sense of oneness that pervades Slowhand.

Slowhand was recorded at Olympic Studios in South West London in May 1977 and features Wonderful Tonight, Lay Down Sally and Cocaine - songs that are still heard regularly on radio and at Eric Clapton's live shows. So long after it's release is a great recommendation and testimony to its place in Clapton's canon. The album includes cover versions of songs written by some of his favorite songwriters along with original compositions by Eric Clapton.