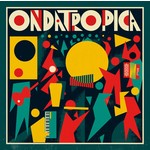 Reissued 3LP with bonus 7" + full booklet documenting the creation of the record and the artists involved.

Colombian musician, Mario Galeano, the force behind the band Frente Cumbiero, and English producer Will Holland a.k.a. Quantic, joined forces in 2012 to create the celebrated Ondatropica project.

Recorded at Discos Fuentes in Medellin, Ondatropica exists to explore and expand the tropical sound of Colombia in its rawest form and to marry it with contemporary influences from around the world. The concept brings together an iconic group of top Colombian musicians representing both the classic and more modern styles of la musica Colombiana. Artists such as Fruko, Anibal Velasquez, Michi Sarmiento, Alfredito Linares, Pedro Ramaya Beltran, Markitos Mikolta and Wilson Viveros joined a group of younger Colombian musicians, members of both Mario's band Frente Cumbeiro and Quantic's Combo Barbaro, to (re)generate the excitement that positioned Colombian music as one of the most influential in South America.