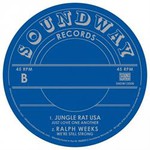 This sweet soul inspired double header harks back to Panama in the late 60′s, a time when musicians fearlessly combined and brilliantly executed styles that reflected their multicultural environment.

Both tracks were originally served up on a super limited 45 on Segraves Records in 1969 and and highlight the massive influence of American soul music on musica Panamena during and after the black power cultural movement in the US. A reference to the early work of the godfather of soul, James Brown, may seem a tad lazy but it's about as honest as it gets.