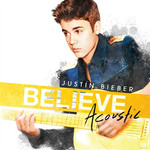 Fans of the Prince of Pop should flock to 'Believe Acoustic'; this highly-anticipated 11-song album offers acoustic versions of songs from Justin's worldwide multi-platinum #1 album 'Believe'. Included are acoustic takes on four of his biggest radio hits: "Boyfriend", "As Long As You Love Me", "Beauty And A Beat", and "All Around The World". Delighted listeners will also find acoustic renditions of album tracks "Take You" and "Be Alright", as well as of "She Don't Like The Lights" (originally a bonus track on the deluxe version of 2012's Believe). All acoustic tracks were co-produced by Justin Bieber and his guitarist Dan Kanter.

As if that weren't enough post-holiday pandemonium, 'Believe Acoustic' also introduces previously unreleased songs "Yellow Raincoat", produced by Justin and Tom Strahle, "I Would", produced by Da Internz and Aaron Michael Cox, and "Nothing Like Us", written and produced solely by Justin, which gives fans an unprecedented and intimate glimpse of young love. Fans can also expect a live studio version of "Fall" from Believe, likewise produced by Bieber and Kanter.