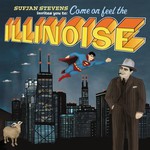 With two states down and only 48 to go, Sufjan Stevens' ambitious musical map of the Unites States of America should be completed -- if he puts out one a year -- sometime around 2053. It's a daunting task (and not an entirely original one at that), but if each subsequent record is as good as Illinois, fans who live long enough to witness the project's completion will no doubt find themselves to be scholars of both state history and its narrator's shape-shifting soul.

Stevens' soulful folk epics, as played by his signature mini-orchestra, have changed little since his 2003 foray into Michigan -- a charge that may cause some grumbling among that album's detractors -- but there's a newfound optimism that runs through much of Illinois that echoes the state's "Gateway to the West" pioneering spirit. Glorious road trip-ready cuts like "The Man of Metropolis Steals Our Hearts," "Come On! Feel the Illinoise!," and "Chicago" have an expansiveness that radiates with the ballast of history and the promise of new beginnings. Stevens has done his research, with references to everyone from Abe Lincoln, Frank Lloyd Wright, and the ghost of Carl Sandburg to John Wayne Gacy -- the latter provides one the song cycle's most affecting moments.

The lush (yet still distinctly lo-fi) indie pop melodies draw as much from classic rock as they do progressive folk. "Jacksonville," with its four-chord banjo lurch, mines "Old Man"-era Neil Young, disco strings dance around "They Are Night Zombies!! They Are Neighbors!! They Have Come Back from the Dead!! Ahhhh!," while the rousing pre-finale "The Tallest Man, the Broadest Shoulders" is pure Peanuts-infused Vince Guaraldi as filtered through the ambiguous kaleidoscope of Danielson Famile spiritualism.

There's a distinct community theater vibe to the whole affair that may or may not be the result of numerous photo shoots in which the players are dressed in adult-style Boy Scout uniforms -- it brings to mind the Blaine Players from Christopher Guest's small-town theater parody Waiting for Guffman -- but the majority of Illinois is alarmingly earnest. Stevens may be a snake-oil salesman, but he's got pretty good stuff, and like many of history's most untrustworthy wordsmiths, he somehow manages to switch the opportunist off and turn on the human being each time the listener gets suspicious of his intentions. 4 / 5 All Music Guide.

Side 1:
Concerning The UFO Sighting Near Highland, Illinois
The Black Hawk War, Or, How To Demolish An Entire Civilization And Still Feel Good About Yourself In The Morning, Or, We Apologize For The Inconvenience But You're Going To Have To Leave Now, Or, "I Have Fought The Big Knives And Will Continue To Fight Them Until They Are Off Our Lands!"
Come On! Feel The Illinoise! Part I: The World's Columbian Exposition Part II: Carl Sandburg Visits Me In A Dream
John Wayne Gacy, Jr.
Jacksonville
A Short Reprise For Mary Todd, Who Went Insane, But For Very Good Reasons

Side 2:
Decatur, Or, Round Of Applause For Your Stepmother!
One Last "Whoo-Hoo!" For The Pullman
Chicago
Casimir Pulaski Day
To The Workers Of The Rock River Valley Region, I Have An Idea Concerning Your Predicament

Side 3:
The Man Of Metropolis Steals Our Hearts
Prairie Fire That Wanders About
A Conjunction Of Drones Simulating The Way In Which Sufjan Stevens Has An Existential Crisis In The Great Godfrey Maze
The Predatory Wasp Of The Palisades Is Out To Get Us!
They Are Night Zombies!! They Are Neighbors!! They Have Come Back From The Dead!! Ahhhh!
Let's Hear That String Part Again, Because I Don't Think They Heard It All The Way Out In Bushnell
In This Temple As In The Hearts Of Man For Whom He Saved The Earth

Side 4:
The Seer's Tower
The Tallest Man, The Broadest Shoulders Part 1: The Great Frontier Part II: Come To Me Only With Playthings Now
Riffs And Variations On A Single Note For Jelly Roll, Earl Hines, Louis Armstrong, Baby Dodds, And The King Of Swing, To Name A Few
Out Of Egypt, Into The Great Laugh Of Mankind, And I Shake The Dirt From My Sandals As I Run
The Ava Lanche