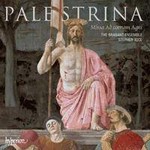 The Brabant Ensemble, better known for uncovering works by forgotten composers such as Dominique de Phinot, turns to a giant of the Renaissance-perhaps the most celebrated name of the period. Yet within Palestrina's huge output there are many hidden gems, lacking both recordings and modern performing editions, and it is from among these that the ensemble's director Stephen Rice has chosen the repertoire for this album. A Mass-Missa Ad coenam Agni, from Palestrina's first book of Mass-settings-is included, plus antiphons, motets and five Eastertide Offertories. Each work is, as Stephen Rice states in his typically informative booklet notes, 'a finely crafted addition to the liturgy'.

The Brabant Ensemble brings a matchless blend of musicianship, scholarship and sensitive singing to this glorious music.