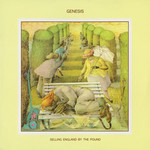 When this album was released in 1973 (the same year as the famed "Live" set), Genesis had become one of the fastest-rising groups on the pop scene. The band's blend of classical instincts, theatrical presentation, as well as whimsically complex and daring arrangements established them as leaders of the British progressive rock movement, along with fellow giants Yes, ELP, Pink Floyd, King Crimson, and Jethro Tull. After returning to the studio, these talented musicians continued to labor and experiment.

The result of their effort is Selling England by the Pound, considered by some to equal their masterpiece, Lamb Lies Down on Broadway. It was truly a group effort and is still widely-acknowledged as one of the great albums from the 1970s! And in what was perhaps a foreshadowing of things to come, drummer Phil Collins made his vocal debut here on the song, More Fool Me.

Side One:
Dancing With The Moonlit Knight
I Know What I Like (In Your Wardrobe)
Firth Of Fifth
More Fool Me

Side Two:
The Battle Of Epping Forest
After The Ordeal
The Cinema Show
Aisle Of Plenty