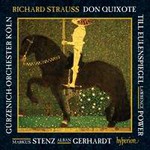 "Stenz gets the proportions exactly right. He plunges us into the delirium of the melancholy hero's addled brain with a clarity pointing forward to Schoenberg's First Chamber Symphony...Adventurous Alban Gerhardt is vivid as Quixote takes several tumbles...The peerless viola player Laurence Power is luxury casting as an equally human Sancho Panza. No stars needed to be drafted in for one of the best Till Eulenspiegels on disc...an irrepressible performance." Five Stars BBC Music Disc of the Month May 2013

"Gerhardt and Power convey the complex nature of the relationship between the two...Stenz's conducting is all about the cumulative impact of small gestures rather than grand statements. We're conscious throughout of the classical form at the work's heart, though Stenz is also marvellous when it comes to those astonishing moments when the Don's fantasies assume a transcendent reality greater than anything on earth. It's nigh-on perfect." The Guardian

These roles are luxuriously cast in this new recording, being taken by Hyperion artists Alban Gerhardt and Lawrence Power. The merry tale of Till Eulenspiegel completes this release.

The Gürzenich-Orchester Köln, the very orchestra which gave the premieres of both works in the 1890s, is conducted by Markus Stenz, who has held the position of Principal Conductor since 2003. He visited China with the orchestra in early 2008 and conducted their first ever BBC Prom at the Royal Albert Hall in August 2008. In September 2010 he returned to China with the Gürzenich Orchestra and the Opera of Cologne to conduct the first ever production of Wagner's 'Ring' in Shanghai. Among other posts he is Chief Guest Conductor of the Hallé.