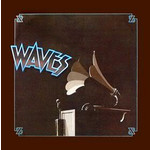 "For one brief moment, Waves sat atop the crest (well, a small crest anyway). We weren't there for long, but the view was sensational. It's a place no one gets to stay forever, and so we came, we saw, we played a tune; and then we went. We were three singer/songwri­ter/guitarists and one bass player, with add-ons when we needed them. We played acoustic guitars (we're so old now there probably wasn't any power back then). We also had a taste for harmonizing; thus the comparisons were inevitable, but we had more going on than that.

During 1974 we were out and about plying our musical wares when the independent Direction Records label scooped us up. In those halcyon days NZ was a hard place to survive on a diet of original songs, but there was a small but devoted taste for it, and that's what we chased. And Waves had some success, hitting No.6 on the NZ album charts in 1975, which in those 'play something we know' days was a reasonable feat.
Our live performances were well received; we worked places like the Auckland Town Hall, The Mercury, His Majesty's Theatre, The Maidment, The Pumphouse, Levi's Saloon, The Island of Real and any small clubs or schools that wanted in. Naturally, in time the bubble burst. Music was a hard game in this part of the world, and Direction eventually went down. We kept going, with new bass player and drummer in tow, recording a second album which until now has never been heard. So we have something brand new for you - it's only 37 years old! Hilarious.

Music is a wonderful thing; it defines us as a species, in a way not much else does, as it cuts across a multitude of divisions to unite people. The genre is not important; there is enough room for all of it. If your song has made the soul of one human being glow a little brighter, then you've done the job required. For a little while, we did that. "
Graeme Gash, March 2013

"Of the many New Zealand albums long overdue for a reissue, the sole album by the acoustic quartet Waves is among the most worthy. The band of Michael Matthew, Kevin Wildman, Graeme Gash and David Marshall were straight out of the post-Crosby Stills and Nash school of close harmony singing, acoustic guitars and some pointed electric playing when the moment demanded it.

Their debut album - produced by Peter Dawkins and engineered by Phil Yule - was recorded in four days at Stebbing Studios in Auckland with a little help from the likes of Mike Chunn on bass (of Split Enz/Citizen Band fame), keyboard player Mike Harvey, Murray Grindlay of the Underdogs etc, here on harmonica), Mike Caen (of Streetalk) and others." Graham Reid, elsewhere.co.nz

Side B:
Arrow
Ocean Neon Song
Elouise
At the Beach
Waitress
Castle Gates