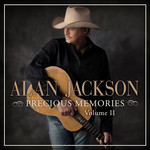 The difference between Alan Jackson's 2006 al­bum Precious Memories and its 2013 sequel Precious Memories, Vol. 2 can be seen in the cover art as well as heard in its grooves. On the cover of the 2006 album is a sepia-tinted photo of Jackson sitting on the steps of an old church; on the cover of Vol. 2 is a crisp, clean colour snapshot of the singer in a studio, consciously posing for the camera.

Similarly, the first Precious Memories sounded old and dusty, as authentic as a small-town church, but this second volume is stark and bright, sounding as contemporary as the day it was recorded. This transparency doesn't hurt this collection of familiar hymns - "Amazing Grace," "O How I Love Jesus," "Precious Memories," "When the Roll Is Called Up Yonder" are some of the featured tunes here - but this does mean that the album doesn't feel quite as warm and cozy as its predecessor. Nevertheless, this is a reverent, resonant spiritual album distinguished by its sweet sincerity.