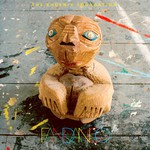 Fandango is an expansive, ambitious and gloriously rich 78 minute, 2-Disc album recorded over a 15-month period at four studios. From opener 'Black Mould' (perhaps the first motorik inspired song about a mouldy bathroom) to the 18 minute closing behemoth 'Friendly Society' (almost certainly the only psychedelic epic named after the Quaker movement) Fandango is un-coy about its lofty ambitions in an age of digital disposability.

The album draws from the bands' collective love of the rock music cannon but also from some of its forgotten by-waters. Check the soulful yacht rock of 'Sideways Glance', the end-of-the-party psych-folk of 'Modern Rock', and first single 'The Captain', a 3 minute ballad of melancholic melodic joy featuring the vocal talents of co-frontman Lukas Buda.