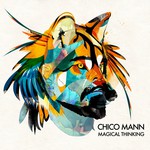 Chico Mann (aka Marcos Garcia) is an artist who is difficult to pigeonhole into a single musical genre. The New York City-born multi-instrumentalist has worked with indie darlings TV On The Radio, revered Philly rap band the Roots, and Dam Funk in addition to being a solo artist. The genre-bender eclectically mixes elements of pop, funk, electronic, merengue, and Afro-beat throughout his fifth album Magical Thinking, released via Soundway. The era that most influences Mann throughout the album is the 1980s, where cues overtly reference the synth-heavy music of that time.

Magical Thinking has many solid musical moments of note. "Comes and Goes" sets the tone, dominated by synths and funk ideas definitive of the 80s. The instrumental riffs are the main attraction, in addition to the overall lushness of the timbre. Annakalmia Traver handles vocal duties, delivering a solid, no frills performance. Leaving little to quibble about ultimately, "Comes And Goes" (like many proceeding cuts), overindulges in duration. "Edge of It" complements, buttressed by superb drum groove and funky, rhythmic guitar. The production is crisp and clean, laden with minimal, repetitive ideas. The neo-disco track "Same Old Clown" caps off the trio of standouts, with guest vocalist Kendra Morris matching the danceable nature of the music with light, perfectly suited vocals.