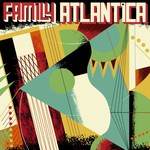 Recorded over 4 years in London and Venezuela, Cuban rumba, Venezuelan tambor and tonada, Ghanaian highlife, Ethiopian blues and calypso have been soaked and infused with psychedelia and spiritual jazz. Gilles Peterson included the band in his recent 'Hot For 2013 Show' on BBC 6music, premiering the track Cumbacutiri.

At the heart of Family Atlantica are three people from three different continents: London born Jack Yglesias, producer, multi-instrumentalist and a veteran of The Heliocentrics, his wife Luzmira Zerpa, traditional Venezuelan musician, poet and singer with a magical voice acclaimed by Manu Chao and half Nigerian-half Ghanaian percussionist Kwame 'Natural Power' Crentsil.

Recorded while living in an abandoned vicarage in East London, the record contains three different generations of Luzmira's family as well as a cast of musicians from the wider Family Atlantic family.

One of the guests on the album, legendary Ethiopian-jazz maestro Mulatu Astatke, adds a classic touch on piano to 'Escape To The Palenque', soloing in his unmistakable flowing Ethiopian 6/8 style. Also featured on the record are Senegalese Nuru Kane and Afro-Cuban group Yoruba Andabo. Much of the record was recorded by the Heliocentrics' Malcolm Catto at their East London studio.