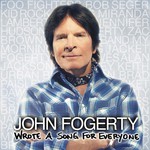 John Fogerty
Wrote A Song For Everyone

John Fogerty presents a new album featuring 16 special guests on 'Wrote A Song For Everyone' The album is a celebration of his iconic songbook and a collection of 12 classics as well as two brand new songs.