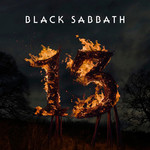 Produced by Rick Rubin (seven-time Grammy winner, two of those as Producer of the Year), the album will be released on Vertigo (worldwide) and Vertigo/Republic in the U.S.

Having already sold over 70 million albums together, 13 marks the Grammy-winning, Rock and Roll Hall of Fame inductees return to Vertigo Records, the band's original label; it's the group's first studio album together since 1978's Never Say Die!

The Deluxe Version includes a Bonus CD featuring the tracks "Methademic", "Peace Of Mind" and "Pariah".