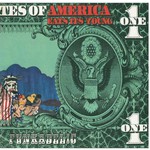 A double album and worth every minute of it, America Eats Its Young makes for a freaky, funky, and aware good time. Compared to the endless slabs of double-album dreck that came out around the same time from all sources, here Funkadelic brought life, soul, and much more to the party.

With George Clinton credited only for arranging and producing, here the mad cast he brought together went all out. Bernie Worrell in particular now had a new importance, credited as co-arranger with Clinton as well as handling string and horn charts on a number of songs. His surging, never-stop keyboards, meanwhile, took control from the start, with his magnificent lead break on the opening "You Hit the Nail on the Head" making for one of the best performances ever on Hammond organ. Bootsy Collins (credited as William) is also somewhere in the crowd on bass and vocals, while old favorites like Eddie Hazel and Tiki Fulwood, among many others, can be found.

Perhaps to fill in the time, a few numbers from the first Parliament album, Osmium, two years before cropped up, namely "Loose Booty" and the hilariously sleazy "I Call My Baby Pussycat," here performed with a noticeably slower, dirty groove. The straightforward social call to arms appears throughout, with one song title saying it all -- "If You Don't Like the Effects, Don't Produce the Cause." Other winners include the vicious title track, combining everything from mysterious, doom-laden voices and weeping wails to slow, sad music, and the concluding "Wake Up," while "Everybody Is Going to Make It This Time" is a lovely, gospel-informed ballad that heads for the skies and hearts.

There are more mundane concerns as well, such as "There Was My Girl," a quirky weeper, and the weird if smoothly delivered "Miss Lucifer's Love," with more than one target in mind.
3 / 5 All Music Guide.