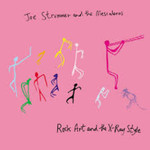 Amere decade after his first post-Clash solo effort, Earthquake Weather, Joe Strummer comes bounding back into the ring just as his previous band's legacy is revisited via a superb video documentary Westway To The World, an incendiary live collection From Here To Eternity and the remastered reissue of their entire back catalogue.

In those circumstances a new album could have suffered terribly by comparison with former glories but it's to Strummer's credit that Rock Art. . . . fits seamlessly into the overall picture of which he was such a crucial component.

On their final three studio albums The Clash were extraordinarily eclectic, maintaining a devotion to Rock'n'Roll and Reggae yet never afraid to offer their own take on genres as diverse as Rap and World Music. Here Strummer has maintained that open-mindedness without ever seeming like a cherry-picking musical tourist.

Throughout Rock Art there's a warmth and vitality in the way the various styles are blended, with the backings rarely sounding forced and, of course, Strummer's distinctive bark dominating the foreground.

The opening 'Tony Adams' sets the agenda with a Punk-fired Reggae romp as Strummer piles dislocated images on top of each other to capture the chaos of a power blackout in New York (and no, I haven't a clue as to how the Arsenal stopper fits into the apocalyptic scheme of things).

The following 'Sandpaper Blues' and 'X-Ray Style' are more relaxed but no less engaging, the former sauntering along with South American optimism and the latter revisiting the sparse soundscape of 'Straight To Hell' via a route which can only be described as Cajun dub.

The only references to his litigation-laced ten-year exile come in 'The Road To Rock'n'Roll', "(On the road to Rock'n'Roll there's a lot of wreckage in the ravine" ) and 'Nitcomb' ("Gonna take a nitcomb to get rid of me") but Strummer sounds philosophical rather than bitter at his lot.

This is an album where the stately and dignified protest of 'Forbidden City' (written in the aftermath of the Tiananmen Square massacre) sounds more seemly than the snarling rants of yore.

Best of all is the closing 'Willesden To Cricklewood', a touching and quite beautiful song about finding peace in the ordinary, his throaty rasp complementing the lush strings and sounding unbelievably moving when he sings the lines "Thought about my babies grown/Thought about going home/Thought about what's done is done/We're alive/And that's the one". End of argument. End of album.

Side B:
Techno D-day
The Road To Rock'n'roll
Nitcomb
Diggin' The New