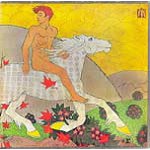 Fleetwood Mac are one of rock's most enduring, beloved and successful bands,
THEN PLAY ON (first released in 1969) was the band's third studio album and their first release with Reprise Records. It was the first to feature Danny Kirwan and would become their last with Peter Green.

This release gathers up all Peter Green‐led Fleetwood Mac Reprise era material in one disc. The original running order, content and track segues have all been restored. Underway no longer fades early, One Sunny Day & Without You have never been on any previous CD version of Then Play On and World In Harmony the single version has never been on CD.

1.Coming Your Way
2.Closing My Eyes
3.Fighting For Madge
4.When You Say
5.Show Biz Blues
6.Underway
7.One
Sunny Day*
8.Although The Sun Is Shining
9.Rattlesnake Shake
10.Without You*
11.Searching For Madge
12.My Dream
13.Like
Crying, 14.Before The Beginning