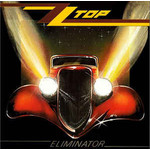 ZZ Top had reached the top of the charts before, but that didn't make their sudden popularity in 1983 any more predictable. It wasn't that they were just popular -- they were hip, for God's sake, since they were one of the only AOR favorites to figure out to harness the stylish, synthesized grooves of new wave, and then figure out how to sell it on MTV. Of course, it helped that they had songs that deserved to be hits. With "Gimme All Your Lovin'," "Sharp Dressed Man," and "Legs," they had their greatest set of singles since the heady days of Tres Hombres, and the songs that surrounded them weren't bad either -- they would have been singles on El Loco, as a matter of fact.

The songs alone would have made Eliminator one of ZZ Top's three greatest albums, but their embrace of synths and sequencers made it a blockbuster hit, since it was the sound of the times. Years later, the sound of the times winds up sounding a bit stiff. It's still an excellent ZZ Top album, one of their best, yet it sounds like a mechanized ZZ Top thanks to the unflaggingly accurate grooves. Then again, that's part of the album's charm -- this is new wave blues-rock, glossed up for the video, looking as good as the omnipresent convertible on the cover and sounding as irresistible as Reaganomics. Not the sort the old-school fans or blues-rock purists will love, but ZZ Top never sounded as much like a band of its time as they did here.
4.5 / 5 All Music Guide.