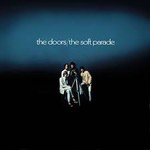 The Doors
The Soft Parade (LP)

The weakest studio album recorded with Jim Morrison in the group, partially because their experiments with brass and strings on about half the tracks weren't entirely successful. More to the point, though, this was their weakest set of material, low lights including filler like "Do It" and "Runnin' Blue," a strange bluegrass-soul blend that was a small hit. On the other hand, about half the record is quite good, especially the huge hit "Touch Me" (their most successful integration of orchestration), the vicious hard rock riffs of "Wild Child," the overlooked "Shaman's Blues," and the lengthy title track, a multi-part suite that was one of the band's best attempts to mix rock with poetry. "Tell All the People" and "Wishful Sinful," both penned by Robbie Krieger, were uncharacteristically wistful tunes that became small hits but were not all that good, and not sung very convincingly by Morrison.

Side A:
Tell All The People
Touch Me
Shaman's Blues
Do It
Easy Ride