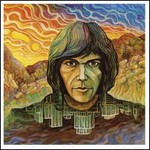 On his songs for Buffalo Springfield, Neil Young had demonstrated an eclecticism that ranged from the rock of "Mr. Soul" to the complicated, multi-part arrangement of "Broken Arrow." On his debut solo album, he continued to work with composer/arranger Jack Nitzsche, with whom he had made "Expecting to Fly" on the Buffalo Springfield Again album, and together the two recorded a restrained effort on which the folk-rock instrumentation, most of which was by Young, overdubbing himself, was augmented by discreet string parts. The country & western elements that had tinged the Springfield's sound were also present, notably on the leadoff track, "The Emperor of Wyoming," an instrumental that recalled the Springfield song "A Child's Claim to Fame." Still unsure of his voice, Young sang in a becalmed high tenor that could be haunting as often as it was listless and whining. He was at his least appealing on the nine-and-a-half-minute closing track, "The Last Trip to Tulsa," on which he accompanied himself with acoustic guitar, singing an impressionistic set of lyrics seemingly derived from Bob Dylan's Highway 61 Revisited. But double-tracking and the addition of a female backup chorus improved the singing elsewhere, and on "The Loner," the album's most memorable track, Young displayed some of the noisy electric guitar work that would characterize his recordings with Crazy Horse and reminded listeners of his ability to turn a phrase. Still, Neil Young made for an uneven, low-key introduction to Young's solo career, and when released it was a commercial flop, his only album not to make the charts. (Several months after the album's release, Young remixed it to bring out his vocals more and added some overdubs. This second version replaced the first in the U.S. from then on, though the original mix remained available overseas.) ~ William Ruhlmann, Rovi

The Emperor of Wyoming
The Loner
If I Could Have Her Tonight
I've Been Waiting for You
The Old Laughing Lady
String Quartet from Whiskey Boot Hill
Here We Are in the Years
What Did You Do to My Life?
I've Loved Her So Long
The Last Trip to Tulsa