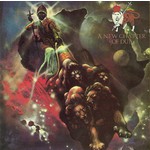 The strongest album of Aswad's CBS period, a powerful roots-and-culture program entitled New Chapter, was followed shortly by what would turn out to be the strongest dub album of several that were produced during the group's career. A New Chapter of Dub was produced by Aswad in collaboration with the up-and-coming dubmeister Mikey Dread (credited here as Michael [Reuben] Campbell), whose work as a radio DJ had made him a household name among London's West Indian expatriate population even before he began establishing himself as a top studio producer.

A New Chapter of Dub finds him digging deep into the traditional bag of dubwise production tricks, using echo, drop-out, and delay in ways that had been pioneered by King Tubby, but applying those effects in a wanton and sometimes exaggerated way in a manner more reminiscent of Lee "Scratch" Perry, an approach that sometimes anticipated developments that would emerge as much as a decade later. On "Flikkaflame," for example, the intensified snare drum echoes that Aswad and Campbell impose on the mix anticipate effects that would become commonplace in jungle mixes of the early '90s; the heavily flanged guitar on "Shining Dub," on the other hand, harks back explicitly to the glory days of the Black Ark. Highly recommended. 4.5 / 5 All Music Guide.