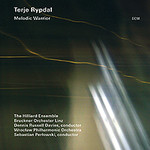 Two large compositions constitute one of Terje Rypdal's most adventurous albums. The title piece, a 45 minute epic, was commissioned by the Hilliard Ensemble and recorded at the Brucknerhaus Linz in 2003 with the British vocal group and the Bruckner Orchestra under Dennis Russell Davies. The Hilliards sing texts drawn from Native American poetry, from Chippewa, Navajo, Pima, and Papago sources, and Rypdal's sustained electric guitar lines soar melodically and dramatically above the strings' broad planes of sound. "And The Sky Was Coloured With Waterfalls And Angels", meanwhile, documents the premiere of Terje's op. 97. Composed in 2009, inspired by Cannes' International Fireworks Festival and recorded with the Wroclaw Philharmonic, it is a darkly-expressive piece of, concentrated, explosive power.